Search for an article

What is Scrum in Project Management 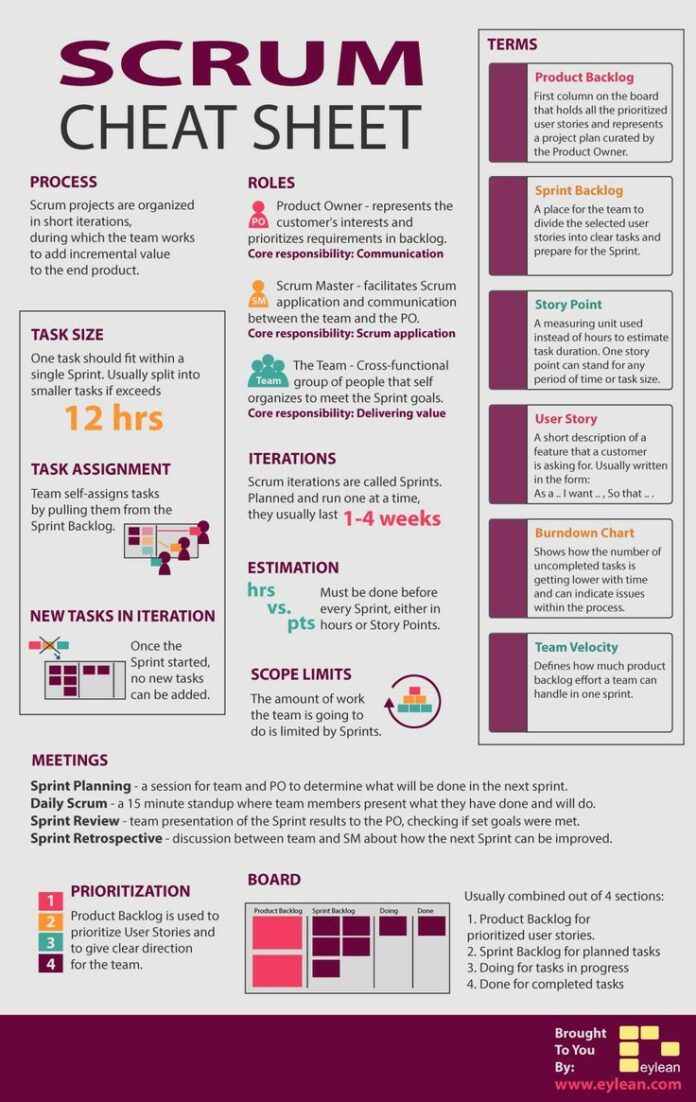 Scrum is an agile-based framework that is used widely today to develop the most complicated products and systems. The name itself refers to the short meetings where members gather and talk about their achievements that are related to the project in hand. And also address the future challenges they will have to face. These meetings focuses mainly on the results members have came to.

To realize its importance, you need to realize how the agile development works. Agile itself isn’t a standard method of software development. It rather gives priority to the continuous achievements of the development of a set of iterative processes.

There are three basic roles to a scrum project, those are:

The product owner is the person that is responsible of the business side of the project. Basically, the one to talk to when the processes drift from the right order.

Since the Product Owner is a key player in the project, it is up to him or her to have a vision for the future. He also bears the responsibility of making that vision clear to the entire team. This is a crucial first stage in the Agile software development process, and it is often carried out using the product backlog. The product backlog is a list of tasks that must be completed throughout the course of the project, typically ordered in order of importance.

Only someone who has a thorough understanding of what end users want to see could assume the critical function of product owner. Regardless of who it is, whether from the marketing or product testing teams, they should be able to articulate what the users want from the project team. It’s crucial that the owner of the product understands potential trends in the market and what strategies or features rivals are using to obtain an advantage over them. But that also depends on the kind of product being developed (e.g. hardware or software).

The scrum master role is to make sure all members of a team understand scrum and their roles in it. It’s more of a coach to ensure certain members of the team can implement the theory and practices of it.

As a facilitator, he aids the group in reaching agreement on what they are expected to accomplish within a given time range. Because he or she is required to take any action that will assist the team succeed, the Scrum Framework sees the Scrum Master as a servant leader. The SM’s job is to remove any barriers standing in the way of the team’s advancement in order to assist it in being the best it can be.

Only a dedicated team can implement a scrum framework. It usually consists of 6 members which include business analysts, software testers and of course, the developers.

They need to have the same goal, they must implement scrum rules and principles to fully achieve their goals of a specific sprint.

During daily stand-up meetings, members of the Scrum team are required to present their daily progress, along with any accomplishments and difficulties, to the Scrum team. The best performance from any new team typically takes two to three weeks to achieve; no new Scrum team ever produces a sprint that is entirely focused on the product increment. It requires time as members transition from being strangers to being a unified force and go through stages of getting used to working together.

The Difference between Scrum Master and a Project Manager

In an Agile setting, there are several contrasts between the positions of Project Manager and Scrum Master. People frequently wonder if the project manager role is unnecessary given the Scrum Master position’s existence and the fact that the product development team is collectively accountable for any successes or failures.

The precise function of the project manager has long been a source of contention among the Agile community. The Scrum Master function and the Project Manager role are actually two completely distinct roles; keep in mind that the Scrum methodology is meant to be a departure from the conventional way of doing things.

In conventional project management, the project manager is viewed as the person in charge, the final decision-maker, and the person who bears the responsibility for any failures. He or she ensures that project goals are achieved and will be held accountable when things don’t go as planned.

We may claim that the Product Owner role and Project Manager function are quite comparable in this way (as opposed to the Scrum Master role). The Scrum Master should play a facilitation/coaching function; he is not to take decision actions or provide solutions to problems, according to a Scrum best practice. In contrast, the Project Manager may also make decisions and/or offer solutions.

Prior to an organization implementing Scrum, it is the project manager’s duty to keep an eye out for Scrum team members who stray from the methodology owing to the temptation of ingrained habits. They have a responsibility to remind misbehaving team members that Scrum demands continual improvement because learning is a dynamic process and we can only learn by doing.

Job Family  Management Consulting  Travel Required  Up to 10%  Clearance Required  None  What You Will Do  Interact with the customer on...
Jobs

Talentify helps candidates around the world to discover and stay focused on the jobs they...
Jobs

About our Client  Our client is on a mission to empower our customers with lights-out...
Jobs

Job Family  Management Consulting  Travel Required  Up to 10%  Clearance Required  None  What You Will Do  Interact with the customer on...
Jobs

Talentify helps candidates around the world to discover and stay focused on the jobs they...
Jobs

About our Client  Our client is on a mission to empower our customers with lights-out...
Learn Management

Huge online community of Project Managers offering over 12000 how-to articles, templates, project plans, and checklists to help you do your job.

To get email updates from Learn Management.